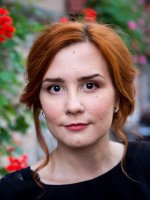 Alena Sabuchová (1989) studied screen-writing and dramaturgy at the Academy of Performing Arts in Bratislava. She received the Ivan Krasko Prize and the Tatra Banka Foundation Prize in the category Young Creator for her debut Zadné izby / The Back Rooms. For the story of her second book Šeptuchy / The Whisperers, she had been returning to the region of Podlasie at the Polish-Belarussian border for three years - a region that is magically slow and where healers still operate. The novel received the Anasoft Litera Award for the best prose of 2020 and also the prize of the book bloggers Panta Rhei, as well as a nomination for the Ján Johanides Prize 2020 in the category under 35.