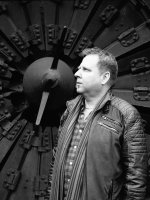 These are probes into a world of the deepest existential intimacy, a world of anxiety, loneliness, fear of being in a space full of absurdity and external hostility. Although the title Leptokaria implies disdain and revulsion for a skin disease, the name of the Greek island – as we are informed in the story of the same name – can be seen as a certain spatial boundedness of one’s own neurotic existence, maybe also transferred to Central Europe, somewhere on the banks of the Ipeľ. Balla shows himself to be a narrator with a feeling for a story; his sentences are full of dynamism and tension. A characteristic feature of this book is intertextuality, sudden changes in the story-telling angle, shifts between the so-called literary and extraliterary, the connecting and interweaving of testimonies different in value and style. In spite of the continuous cuts, transitions between seriousness and absurdity – sometimes even in the form of senseless comicality  – philosophising contemplation and  poetic delicacy – the author’s interest always remains centred on the inner self, buffeted with doubts and uncertainty.

Balla is a musician. It is as if we can hear the delicious tones of well-tuned words in a natural stream of language, of flowing consciousness. Motifs emerge from this smooth stream, sometimes dominating, at other times secondary, they confront each other, appear unexpectedly, taking the reader by surprise, but they fit in the distinct inner rythm of the story. Balla embellishes silence, he blathers. And it is a pleasure to listen to him, because as Kant has already said, it is we ourselves who prescribe the world its forms.

For Balla existential anxiety has become the alpha and omega of all his writing, dissection of states of anxiety, fear, pain and uncertainty his only literary theme. He made do with this throughout the whole of the nineties and continues in this vein. Unfortunately for him and for his readers. Balla has once again presented us with depressed individuals, whose idea of themselves is highly negative. The characters are faced with the dilemma of how to give their existence some purpose, but somehow a viable way is not in sight. (...) Balla’s strategy as an author is already traditionally based on a mixture of philosophising, intellectual poses and use of irony, which sometimes slips into cynicism or into pathos. There is also again a signal directed at the reader that the author has a firm grip on things and that it only depends on him whether the story that could end unexpectedly, does in fact continue. It goes on, even though the destination is unknown (to Balla’s literary figures) and where the author is heading is also unclear. The problem is not so much the formulation of a world of negative and helpless feelings, but more the banality of the stories. They are variations on “records of pain”, with an easily perceptible pattern, rigidly concocted, uninspiring on account of their repetition. (...) As an author Balla is too confined within his own shell.

In his collection of texts Cudzí / Strangers, Balla continues along the lines indicated in his earlier book De la Cruz. Not so much thematically, but more in the mood or a kind of feeling from a world in which an oppressive dream and an unfeigned aloof smile are mixed in original proportions. Readers might consider some of the stories to be variations on themes from De la Cruz, while others will clearly be seen as a real continuation and completion of the story, correcting and sharpening the point of view, which is Balla’s strategy as an author. He remains faithful to many of his favourite motifs – he allows his characters the obligatory oscillation between the awareness “of a really hopelessly empty life” and – in his opinion – the ephemeral belief  “in the possibility of some other way of living”.  He is generous with the significant moments “of uncertainty and fear”, or “well concealed eternal sorrow”. As for the use of literary allusions, which is an important feature in Balla’s writing, inspiration can be seen to have been taken in equal measure from Fulcanelli and inevitably from Kafka. In Balla’s case this involves more than a simple use of a quote in the form of a motto. He paraphrases poetics – without being suspected of epigonism and with a single aim: to stress the different levels of his own precisely formulated and original authorial philosophy.  (...) Balla’s aim is to turn away from the set pattern. To disrupt the stereotype. Again and again he goes back to his introverted characters in order to make use of his observations about their endeavours seasoned with existential moments to inspire the reader into action. For this he sometimes uses a short, condensed text, at other times he allows himself a more extensive escape to “an extreme, absurd, half-dreaming situation, even to a struggle for bare survival, that is, to the true nature of the world”. As a writer Balla is a stable brand name. Always equally self-ironic, always remorselessly ironic. It confirms the aura of an author capable of abstraction from what is everyday and commonplace, the manifestations of which are however one of the most striking motivations of his writing. Balla’s “judgmental” attitude towards human imperfections is so overdone that it can arouse in the reader either outright rejection on account of incomprehension, or – in the better case – understanding for his refined version of hyperbole. He does not ease up on his misogynic and seemingly misanthropic stylisations, but more important than considerations of the measure of their authenticity is the intensely ethical and humanistic tone in the subtext.