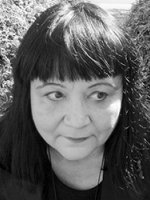 Podracká was born on March, 9th 1954 in Banská Štiavnica. After graduating from high school, she continued her studies at Comenius University, majoring in psychology. Then she worked at the Psychological Institute and at the publishing houseSlovenský spisovateľ vate as an editor. In 1991, she joined the staff of the literary weekly Literárny týždenník where she worked as deputy chief editor. Podracká lives in Bratislava. Dana Podracká belongs to those Slovak women poets who reach into the depths of feminine feelings but at the same time reflect these feelings in the context of the outside world. The author often deals with various taboos and hidden aspects of life. Her poetry is full of original images often enhanced by pagan or Christian symbols and historical references. Myths, symbols and rational visions coexist dynamically, analyzing and verifying each other. Podracká sees love as the lifegiving and lifesaving essence of human existence. In her essays she is trying to grasp the most intimate aspects of femininity. This tendency prevails even in her analyses of symbols and trends in the works of outstanding Slovak writers (e. g. Sládkovič, Mináč, Mihalkovič) or authors of international fame (Dostojevskij, Fowles, Tsvetajeva).