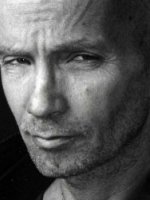 Groch finished his studies at the local secondary school in his hometown of Košice in 1976 and then had various jobs, some quite curious. Until 1989 he was active in circles around the literary, artistic and intellectual underground in Košice, participating in seminars that took place in the home of the philosopher Marcel Strýko. In the years 1991-1992 he co-founded and co-edited the literary almanac Silent Water, volumes I, II and III. In 1990 he joined the revived weekly Kultúrny život as an editor and in 1992 he established his own publishing house, which he later named Knižná dielňa Timotej. It publishes mainly translations of philosophical and theosophical nature. Groch the poet entered the literary scene in 1989 with the collection of poems Súkromné hodiny smútku (Private Lessons in Sadness). His style is based on a civil variation of the so-called Christian lyric. Groch's interest in fairy tales, obvious in his second book, Baba Jaga: Žalospevy (The Old Witch: Elegies, 1991) has been complemented by his interest in the primitive, or, to be precise, in proto-religions and neo-paganism. In his third book, Bratsestra (Brothersister, 1992) the author made a significant shift from the playful to a more meditative kind of poetry, reminiscent of Biblical parables. The semantic framework of each poem, however, is much more intimate and personal.