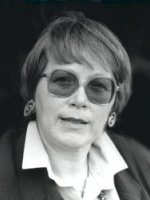 Etela FARKAŠOVÁ, a writer and philospher, was born in Levoča in 1943. After studying mathematics and physics, and later philosophy and sociology, she first taught high school. In 1972, she started working at the Faculty of Arts of the Comenius University in Bratislava, first as an assistant, then as an assistant professor and finally as a professor.  Between 1994 and 1995, she was a hosting professor at the Philosophical Institute of the University of Vienna. Between 1998 do 2010, she was the head of the Department of Philosophy at the Faculty of Arst of the Comenius University in Bratislava. In 2018, she won the Anasoft Litera Award for her novel The Screenplay.  She lives in Bratislava.