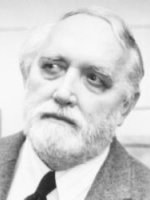 Johanides studied history of fine arts at Comenius University in Bratislava, but he interrupted his studies in the third year and took
a number of different jobs. First as a company psychologist in a television manufacturing plant in Orava, then as an administrator of the Slovak Writers` Union in Bratislava, then in the culture department of the Bratislava city administration and as a specialist in the Institute of Art Criticism and Theatre Documentation. Mostly he devoted his time to literary work. From 1972 Johanides has lived in Šaľa. Ján Johanides is one of the most expressive personalities of the contemporary Slovak literature. His work can be divided into two periods. His first three books were written between 1963 and 1966. These works were inspired by the current philosophical and literary currents, such as existentialism (Sartre, Camus), the fashionable "nouveau roman" and the literature of the absurd, as well as the devices of surrealism. In his very first works he introduced himself as a striking author with the courage to innovate. An author who knows what it is he wants to accomplish creatively and how to achieve it. His interest is directed towards the problems of human loneliness, anxiety, fear and guilt, the penetration of the inner dimension, the revelation of the processes taking place in the interior of man in crisis. Literary critics received him positively. The literary work of the second period demonstrates the mature personality in socially important topics and problems of contemporary man.
He protests against the pollution of the environment and the amorality of denying it (Unacknowledged Crows). He deals critically with the growth of consumer society and its way of life (A Ballad of a Savings Pass Book), rejects any kind of violence and intolerance in the past as well as in the present (Elephants in Mauthausen).
He reveals the psychological background, the motives and causes of human failures, concerns himself with dimensions of a person`s identity and searches for the deeper personal and social roots of amorality, fear and anxiety against the background of various tragic and bizarre events. This is particularly true of his recent literary works (The Saddest Oravian Ballad, Bridge Crossing, The Crime of a Young Lesbian, The Noise of Blackbirds Before Sleep, Tomcat and a Cold Man, Punishing Crime), all of which met with striking success with readers and critics at home and abroad.