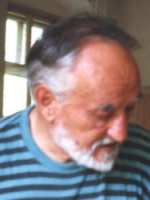 As a mature poet, the author published ten poems in the periodical Mladá tvorba in 1956. From the very outset, the poetry of Ján Ondruš provides an answer to the destructive forces that corrupt the world and the people living in it. Ondruš faces these forces with an enormous determination to be united with his own fragmentariness no matter what circumstances or consequences will ensue. It is this determination that makes him whole and irreducible. Resistance to any immobility is one of the images that are always present in his work. This is the reason why his poetry is so difficult to catalogue and why it is so unique. In the Slovak poetry he has perhaps only one predecessor: J. Kráľ (Romantic poet from the 19 th century).
In the literature of the 20 th century he is situated among such poets as V. Popa,
S. Beckett, H. Michaux, and Ch. Morgenstern
From welcoming the world, Ondruš's poetry moved to creating the forms of anxiety, destruction, but also of life and love. His poetry does not emerge and develop in the usual metaphorical manner.
He does not defamiliarise the reality, nor does he interpret it, but defines the fundamental human condition by understanding the pain of disintegration, the enormous potential of vulnerability, of human and social destructiveness and self-destruction. It is a type of poetic phenomenology that - faced with the changeable nature and complexity of the world and the man and the insoluble contradictions within man - searches for phenomena with axiomatic validity. His "poetic games" like the ones of V. Popa are therefore always more than games and poems.
An important feature of his work is adherence to the surrealist poetics that is found in the linguistic and stylistic destruction and innovation (syntactical anacoluthon, neologisms, grammatical deformations, sentence and idea overreach). The specificity of the devices is reflected in the construction and form of the verses and the poetic forms. The originality of the devices is not an end, or a game, but a means to penetrate the psychosocial essence of the human existence.
Therefore the poet searches for what is further unchangeable and indestructible (water, fire, ashes, scar) and juxtaposes it to the human contradictoriness and destructiveness and against death.
In Slovak poetry, it is Ondruš's work that strips from the poem the traditional lyricism in a most radical manner. It resigns from all the outward signs of poem. It builds
a poem literally from a factual statement that resigns from the expressiveness brought in from outside. The basic pillars are formed by a few elementary things and states that undergo a test of destructiveness (ashes, scar, cross).
In his last collection Sheep in a Wolf's Clothing, Ondruš develops the Morgenstern type of parodic poetry based on the principle of puns. After the Second World War, Ondruš is the only Slovak poet who deserves the attribute "absolute poet". This is because he alone resisted the pressure of deformation by ideologies, while speaking out about the human and social situation of post-war humanity from the position of
a poetic existentialist. He created poetry that, like a human being, refuses to give up, even though everything may be at stake, at the risk of using only a few elementary, often ugly and worn-out words. One should not give up, one must go on - this is the message of Ján Ondruš's poetry.