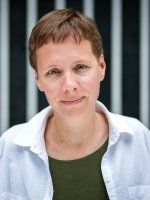 "Beňová is at her best when she's funny, and her sense of humor tends toward the dry and the dark. Seeing People Off is a fascinating novel. Fans of inward-looking postmodernists like Clarice Lispector will find much to admire here." Michael Schaub, NPR

"Stunning... [Beňová] has created that unique and uniquely satisfying phenomenon of a page-turner that must yet be read slowly and precisely."
—Bronwyn Averett, Necessary Fiction

"The setting of Jana Beňová’s first book in English, translated by Janet Livingstone and published by Two Dollar Radio, is mirrored in how the novel itself is built. The bursts of narration — as short as a few words and rarely longer than a page — are recurring contained units, and they provide a stabilizing uniformity to an otherwise eccentric set of characters and scenes."
—Nathan Scott McNamara, Electric Literature

"These stories explore death and other kinds of leaving in wry, fresh ways. The end of childhood, the end of an affair, the end of sanity—when I arrived at the end of this book, I found myself returning to the beginning. This is a merry-go-round one can hold on to."
—Paige Webb, Kenyon Review

"Beňová tugs at the strings that bind conventional narratives, testing the knots and exposing the weaknesses. In so doing, she reveals that sometimes the point of reading might be to lose the thread."
—Ann Morgan, A Year of Reading the World

"[Beňová] is in the first generation of post-Soviet writers for whom scarcity and censorship is a recent memory, and the political is always lurking just behind the breezy Aimee Bender–like prose."
—Publishers Weekly

"Beňová’s short, fast novels are a revolution against normality. Unlike so many others, her novels not only claim to be a revolution but actually achieve this feat through their minimalist narratives that go against all conventions; in fact, Beňová manages to subtly and intelligently poke fun at conventional categorizations."
—Austrian Broadcasting Corporation, ORF

"Beňova’s novel riffs on stories old and new, and the means by which we tell and experience them, to bring the reader inside her protagonist’s mind."
—Vol. 1 Brooklyn

"Jana Beňová’s Away! Away! provides laughs of a slightly more satirical, world-weary sort... No surprise—it’s the journey, not the arrival, that matters, and Rosa’s journey is filled with slings and arrows of outrageous Slovakian fortune."
—Bethanne Patrick, Literary Hub

"All our hand-me-down wants are ways of ignoring the fact that one day we’ll die like dogs. Where will we all go, one day? Away. The gift of Beňová’s novel is the omniscient lurch of her prose (a multi-party stream of consciousness). Away! Away! combines its characters’ voices to form a a choral imploration to the reader: sit down and sympathize with these people who make mistakes because they are so afraid of death, the end of the book. People abandon each other because they’re afraid of being pinned down in an identity: locatable, inanimate. Why begrudge them their selfishness on grounds of its absurdity when what they’re up against is even more absurd than that? (Hint: it’s death.)"
—Michael Mungiello, Cleveland Review of Books

"[Away! Away!] is an interesting tale."
—The Modern Novel blog