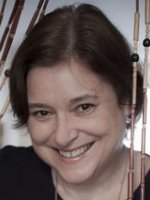 Jana Juráňová studied Russian and English at the Comenius University in Bratislava. She was one of the women who launched the feminist cultural, educational and publishing project Aspekt in 1993. She still coordinates Aspekt. She writes fiction, children’s books and plays, she is also an editor and a translator. Her most successful works of fiction are the books Orodovnice (Mediatrices, 2006) and Žila som s Hviezdoslavom  (My Life with Hviezdoslav, 2008). Her book Nevybavená záležitosť (Unsettled Business, 2013) was nominated for the Anasoft Litera Award 2014.

In her writing, Juráňová consistently and successfully disrupts the traditional gender stereotypes and Slovak myths with a dose of healthy irony. With regard to her educational work and to the scope of her knowledge, she remains a vital figure of Slovak feminism. In 2019, she received the Order of Ľudovít Štúr (First Class) from Slovak President Andrej Kiska for her extraordinary contribution to the development of democracy, human rights and freedoms, as well as her literary activities.