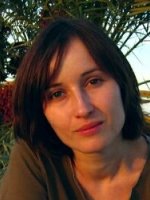 Mária Ferencuhova studied film screenwriting and dramaturgy and did a postgraduate degree in the history and theory of films at the Film and Television Faculty of the Academy of Performing Arts (VŠMU) in Bratislava, and Sciences du Langage at the École des Hautes Études en Sciences sociales in Paris. She has published prose, poetry and literary translations in the periodicals Fragment, Park, Host, Romboid, Vlna as well as in the collection from the Ars poetica (2003) festival, and other publications. At present she lectures in the history of the world film industry at the Film and Television Faculty of the Acedemy VŠMU. She is editor of KINO-IKON, a journal dealing with film theory. She publishes professional articles and studies in the journals KINO-IKON, OS, História, Romboid, Tvorba T, Slovenské divadlo, Človek a spoločnosť, in the collection Priestor vo filme (2000), and others. Her work appears regularly in the Czech journals Cinepur and Iluminace, which focus on film studies. She translates from French (P. Virilio, A. Nothomb and others). She lives in Bratislava. Her first collections of poems are Hidden Subtitles (Skryté titulky, 2003), The Principle of Uncertainty (Princíp neistoty 2008), Vain Little Bubbles (Márnivé bublinky, 2010); her latest work is Endangered Species (Ohrozený druh, 2012).