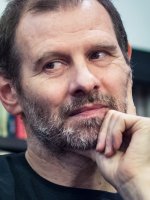 The writer and journalist Martin M. Šimečka was a key figure in Slovakia’s unofficial culture before the Velvet Revolution of 1989. As the son of a prominent dissident he had to do manual labor while publishing his texts in samizdat. In 1990 he co-founded the publishing house Archa. His works of fiction, the novella Žabí rok (The Year of the Frog, 1983) and the collection of short stories Džin (Genie, 1987) were translated into several languages. He is, however, primarily known for his journalism. His articles, published by numerous papers and journals in Slovakia and abroad, mainly focus on the political and cultural situation in Slovakia. He has held a number of high-ranking positions in the daily and weekly press media: he was editor-in-chief of the Slovak weekly Domino fórum and of the daily SME, as well as of the Czech weekly Respekt. He is currently on the editorial board of the independent Slovak daily Denník N. His collection of essays, Medzi Slovákmi (Among Slovaks) came out in 2017.