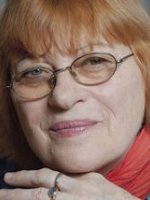 Mila Haugová was born in Budapest, to a Hungarian father and a Slovak mother. In her childhood, she traveled across Slovakia with her parents. After 1968 and the Soviet occupation, she left to Canada but came back after a year. She moved to Bratislava in 1972 and debuted with the collection Hrdzavá hlina (Rusty Clay) in 1980. She has worked as an editor for the literary magazine Romboid for ten years, 1986-1996. The poems of Haugová, one of Slovakia’s most prolific and respected poets, open up spaces for non-visible feelings, for relationships between men and women, mothers and daughters. She is connecting the worlds of humans, animals and plants, her poems being lectures on humanity and on caring for all living creatures. She is an avid supporter and champion of young poets and encourages them to be honest and clear in their writing. She also translates from English, German and Hungarian (e.g. Sylvia Plath, Anne Sexton, Ted Hughes, Ingeborg Bachmann, Georg Trakl). She has received numerous awards for her literary work.