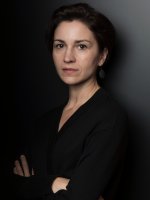 Považská Bystrica
Genre:
general fiction, other, ya and children's books

Monika Kompaníková (1979) is considered one of the most outstanding writers of contemporary Slovak fiction. She studied painting at the Academy of Fine Arts in Bratislava and is the author of four books for adults, five books for children, music lyrics and numerous columns, interviews and reportage. She is a holder of several literary awards and her texts were translated into many languages and published in anthologies both for magazines and as books. The Slovak original of Boat Number Five won the Anasoft Litera Award (2011) and has been translated into fourteen languages. The feature film Little harbour, based on this novel, received the Crystal Bear in Berlinale in 2017. Kompaníková works as a publisher and book editor for Slovak newspaper Denník N.

She debuted with her collection of short prose stories Miesto pre samotu (Place for Solitude). The novella Biele miesta (White Places) ) was nominated for the award Anasoft litera 2007. In 2010 her novel Piata loď (Boat number five) was published and later another novel Na sútoku (At the Confluence). She has also been writing children’s books: Hlbokomorské rozprávky (Deep Sea Tales) and Koniec sveta a čo je za ním (The Edge of the World and What’s Beyond It). For the Slovak National Gallery she wrote the children's book Kde je Ester N? (Where is Ester N?) and she co-authored and edited a book about Czech and Slovak heroines – Kvapky na kameni (Droplets on the Stone). She authored stories behind and co-authored the lyrics for two children’s rock music albums Toddler Punk. First album was released alongside a book of short stories. More song lyrics were then commissioned by Slovak rock-bands. She was a member of the selection literary committees and participated in many international festivals and book fairs.

The novel The Fifth Boat was published in Poland where it was shortlisted for the central european award Angelus. In Croatia it became part of the edition of contemporary European novels and in Egypt it received an award for the Arabic translation (by Khalid Beltagy). It was then translated into many other languages including Hindi, Czech, Romanian, German, Hungarian, Bulgarian, Albanian, French, Macedonian or Russian. English translation was published in november 2021 by the publishing house Seagull. Boat number five was shortlisted for the EBRD prize in 2022.

A feature-length film Little Harbour based on the novel The Fiftf boat co-produced by the director Iveta Grofova had its premiere on an international film festival Berlinale 2018 where it won the main award in the section Generation K+ 2018 - Crystal Bear and it won several awards on international film festivals in Czechia, Australia, South Korea and elsewhere. The film received 11 nominations for the Slovak national movie award and won 3 of them.

The novel The Fifth Boat tells the story of a twelve year-old girl named Jarka who lives with her very young mother in a suburb. Jarka feels a lack of love and attention from her mother whom she can not even call “mother” and is often left abandoned and she has to take care of herself in an empty apartment. She often passes the time by wandering around the neighbourhood by herself. One day she steals a set of six month old twins and takes them in their carriage to a garden hut, determined to take care of them. The addition of eight year old boy Christian, a good boy on the run, makes their “family” complete.

Monika Kompaníková has proven her extraordinary story telling talent and ability to create an authentic atmosphere in her work. This talent combined with the story itself gives this book the chance to aspire to be a “break-through Slovak novel”. Some critics also note that „Fifth Boat“ is a critique of modern society, a rarity in Slovak literature.