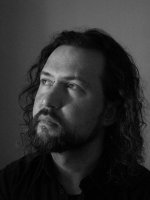 Nicolas Guy graduated in Bohemian studies, Slovak studies and Pedagogy from INALCO (the National Institute of Oriental Languages and Civilizations). He has been translating since 2004 (he received the Prize of Václav Černý Czech Embassy in France for his translation of Pavel Kuklik's short story Mrtvá ve vaně). He has been living in Slovakia since 2007. He has worked as a teacher for over 10 years in Handlová and Banská Bystrica. In 2013/2014, he put together with his colleagues and students of the Matej Bel University a bilingual anthology of contemporary Slovak literature Mosaïque de littérature slovaque contemporaine. He has translated books by Uršula Kovalyk (together with Peter Žila) and by Zuska Kepplová, and also texts by Maxim E. Matkin, Dušan Mitan, Erika Olahová and Pavol Rankov. Since 2016, he lives and works as a freelancer in Bratislava, where he translates and edits scientific texts as well as screenplays.