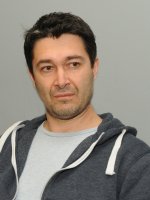 Richard Pupala first studied journalism and art history, afterwards, he finished theatre studies at the Academy of Performing Arts in Bratislava. He had worked as a bartender at the legendary night club U-club before he became a jourmalist. He is currently working as a screenwriter. His literary debut Návštevy (Visits, 2014) is a collection of tragicomic stories of varying lengths that read like they could have happened in any Slovak household or family. The book was a finalist in the Anasoft Litera 2015 competition, as was his second collection of dark short stories, Čierny zošit (The Black Notebook, 2017).