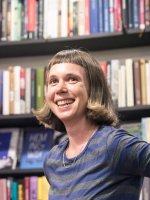 Writer and translator. She studied psychology in Vienna and medicine in Bratislava. She works as a psychiatrist in Prague. Apart from writing blogs and publishing in various magazines (Romboid, Rak, Vlna and others), she translates from German and English. She has published a collection of stories Dulce de Leche (2003), the novella Yesim (2006) and the novel Zlodeji a svedkovia (Thieves and Witnesses, 2011). With the novel Obrazy zo života M. (Scenes from the Life of M., 2013) she won the European Union Prize for Literature 2015.