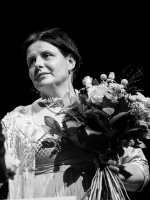 Šikulová is a fiction writer and journalist. Her debut work, a collection of sketches and portraits of family members, Odtiene (Shades, 1997), received the Ivan Krasko Award for the best debut of the year. Her second book, Z obloka (From the Window, 1999), focuses entirely on the theme of the family. Šikulová shows great skill in switching between narrative styles, oscillating between a serious and a witty tone, while treating the reader as an equal partner. Šikulová’s further works of fiction, Mesačná dúha (The Moon Rainbow, 2003) and Domček jedným ťahom (A House at a Single Stroke, 2010) build on the themes and genres of her first book. Her hometown Modra plays a key role in her work, allowing her to focus on its intimate history instead of the larger-scale history of the world beyond it. After a couple more collections of short-form works, she wrote her first novel Miesta v sieti (Places in the Net, 2011), a three-generation family saga. The novel does not aspire to be historical or historicizing. The author simply wants to tell the story of her family, using authentic documents, letters from the war and from prison, as well as routine correspondence between individual characters. Her latest fiction works are Freska v dome (Fresco in the House, 2014) and Medzerový plod (Blank-spaced Fruit, 2014) for which she received the Anasoft Litera Award 2015.