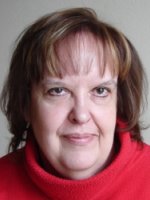 Viera Prokešová was born on August, 2nd 1958 in Bratislava. She studied Slovak and Bulgarian at the Comenius University in Bratislava. After spending one year as a producer at the Puppet Theatre in Nitra (1981 - 1982), she became an editor at the Slovenský spisovateľ publishing house in Bratislava. In 2000, she started working at the Institute of World Literature at the Slovak Academy of Sciences in Bratislava. She also edited poetry and prose for the literary weekly Kultúrny život. She died on December, 31st 2008. Prokešová had published poems in magazines since 1976 but her first book appeared in 1984. Her debut A Strange Woman was based on ordinariness and everydayness - which for her still guarantees stability and safety in accordance with the notion that everyday-ness is "what is left eventually when everything else is gone". Lyrical evocation of a sensitive young woman's world of feelings eventually gave birth to poetry full of gentleness, sensitivity and peace. The lyrical subject with amplified perception of the world and oneself was the determining factor. The book was capturing because of its honesty, simple and civil form and matter-of-fact expression. Some motifs that are so typical for Prokešová's poetry had already made their appearance: the atmosphere of rainy days, her own world confined to the space of an apartment, behind the window or curtain, the eternal flow of time, the changing of seasons, all this as a background for thoughts and reflections. The poetry of Viera Prokešová is thematically concentrated and concise in expression. It is a reflection of the moment, of passing time, of small details taken from real life. It stems from feeling, atmosphere, mood, emotional state, and memory. Her poems are impressive reflections on love, partnership (in a woman's private life a man is perceived more like a guest and visitor) and her own life. Even her first book gives the impression that the lyrical subject somehow doesn't belong, doesn't fit in, and is in a way unique as a woman who cannot or will not identify herself with overt insensitivity. Her lyrical subject reveals a sensitivity of its own (explosiveness, fierceness, and impatience) but at the time is not exalted or violent, everything is done calmly and quietly because Prokešová's poetry is subdued. In her effort to reach harmony, she tends to make things circular, flowing and rounded. The list of feelings recorded in her poems includes sadness, confusion, doubtfulness and since her second book - in which the theme of man-woman relationship is dominant - loneliness and yearning for happiness and later on feelings of emptiness. In spite of this, Prokešová's poetry does not resonate depression because her positive and serene attitude to life always prevails. Gentle feelings are usually confronted with bad weather (rain, snow and water appear quite frequently), melancholy mood is a typical feature. The influence of symbolist poetry can be detected in - sparingly used - parallels between nature and the human soul. Prokešová, however, suppresses any possible sentimentalism or banality of traditional themes with her clear rational thinking. Her poetry has been described as "uniquely female poetry" in 1984, because of its gentleness and fragility and the tendency to reflect life in detail. It has remained the same until today. Viera Prokešová is still "turned inside". With her refined poetry she is one of the leading contemporary Slovak women poets.