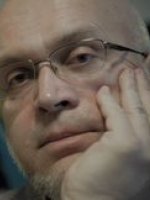 The dramatist, poet, prose writer, stage director, scriptwriter and actor, Viliam Klimáček in his works makes use of avant-garde linguistic resources, the approaches of trash genres, children’s and students’ slang and puns; he parodies the traditional  requisites of books (mottos, epilogues, etc.) and turns traditional literary motifs and biblical myths inside out. He elaborates motifs of childhood, adolescence, love, eroticism, life and death, home and the world. His debut was a collection of poems, to be followed by novels, short stories and dramas. He has written over forty plays for the theatre, for which he won seven prizes. His latest novel so far is Vodka a chróm  (Vodka and Chrome, 2013). It presents the parallel histories of one man and of one country during the “Gentle” or “Velvet” Revolution of 1989. The protagonist asks himself what his life would have been like if the revolution had not been gentle, but bloody. In a relatively short narrative Klimáček has presented a great story that nowadays appears to be a closed chapter, but nevertheless in the context of contemporary literary production it still comes across as fresh and interesting.