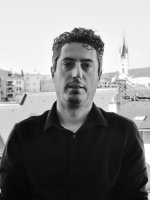 He habilitated at the Faculty of Foreign Languages  of the University FON in Skopje (2011) in Macedonian studies – Slavic languages and literatures, where he worked as an assistant professor in 2011 – 2014. Since 2014, he has held a scientist position at the university in Nitra. He also works at the Department of Slavic Philologies of the Faculty of Arts of the Comenius University in Bratislava sice 2015.

So far, he has published 6 poetry collections, a book of poetry selection in Slovak translation as well as in Serbian, and four works of literary science.

He translates from Slovak into Macedonian. Among his published translations are books by Pavol Vilikovský, Jana Beňová, Ivana Dobrakovová, Peter Šulej, Dušan Mitan, Juraj Šebest, Milan Richter, Miroslav Demák, and František Lipka. In 2017, the Association of Slovak writers' organizations awarded him the  P. O. Hviezdoslav Award for his translations of Slovak authors into Macedonian. His work, poetical and scientific, received various accolades around the world.