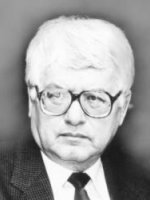 The lyrical energy in Strážay`s poems is shaped by their shortness and by the subdued imagery which results in an unusually delicate presentation.
Albín Bagin

In a Strážay poem, which is untitled and wishes to be a poetical "note" on the edges of life`s accidental observations, we feel a clearly tender, unobtrusive lyrical pathos which "lifts" the observed scene to an understanding overview that liberates us from insignificance and from the burden of the trivial.

Strážay`s poems communicate to the reader very often a re-felt, re-thought, and re-told story - with many details but also with many omissions of what could be hidden behind the scene. Hidden and suppressed is also the tension within an image,
a movement, a gesture but still, one can feel it. Small tragedies of people living beneath their expectations, of nature, cities and streets carrying the burden of human fate.