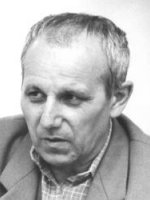 Rudolf Sloboda is one of the most recognized and at the same time most controversial Slovak prose writers. His oeuvre is an unusual phenomenon of Slovak literature. In addition to the expressive autobiographical element and passionate joy of narration, his work is characterized by the presence of irony and self-irony, parody and burlesque. He is a writer of the grotesque (in the Bakhtinian sense) which has to do with his admiration for the prose that teeters between the serious and the comic, the elevated and the low, good and evil, the dramatic and the trivial. In his work, the problem of identity, the search for oneself and later the theme of death dominate. This controversial "genius of banality" with a marked personality myth caused consternation in the Slovak literary world for three decades with his unbelievable openness on both intimate and public issues moderated by his ambivalence to social conformism and his sense of being a deliberate outsider. Sloboda spent his entire life in a suburban village near Bratislava. The atmosphere of his native Devínska Nová Ves with its multicultural character (Slovak and Croatian influences and the proximity of the Austrian and Hungarian borders) is reflected in all his works. He entered the stormy literary world of the Sixties with his novel Narcissus, in which the main character interrupts his studies to work in the mines. The novel Razor deals with jealousy and again uses self-stylization and a narrative mastery. In the stories from the collection Hungarian Year, moments of authentic experience merge with fairy tale motifs. After the novel Grey Roses, where the main character again confronts society`s negative phenomena came The Don Juan Romanetto where Sloboda`s scepticism and relativism increased. With his novel Music about a young conservatory student, he returns, as he comments, to the "times when I read Dostoevsky and Tolstoy, when I was pure". After the novel Another Person where the author unmasks indifference and callousness to the tragic fate of others, followed Sense, which brought him not only high critical acclaim but also great success with readers. Sloboda took on the dominant theme of his oeuvre to which he would constantly return: the story of a frustrated intellectual floundering in both labyrinthine of the communist society, and the maze of his own mind. His experience of alcohol rehabilitation treatment was the background to the extensive prose Paradise Lost. In the novella Ursula, Sloboda focused on the guilt and innocence of a young woman who, partly in self-defence, partly from jealousy, kills her husband. This period closed by An Attempt at Self-Portrait, where the author explains us his poetic and noetic inspirations, his enchantment with philosophical readings and the still debated autobiographical character of his prose. In the Nineties, the Sloboda phenomenon became a symbol of freedom returned to Slovak society. The topic of man-woman relationships treated in Ursula returned in a somewhat related sequel Rubato. In the next novel Blood, the author concentrated on the events that lead to social changes of the dramatic year 1989. In the book Actresses published shortly after his suicide, he announced the end of his intellectual struggle with the world. Sloboda died at the peak of his fame and creativity, a time when Slovak culture also recognized him as a successful dramatist.