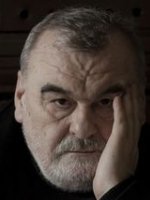 Ivan Štrpka grew up in southern Slovakia. In 1963 -1969 he studied Slovak and Spanish at the Comenius University in Bratislava. He has worked for the Slovak Television in Bratislava in the department of children's programmes. For political reasons he was not allowed to publish his works during the 1970's. In the mid-eighties, he became the editor in chief of the magazine Mladé rozlety and then the editor in chief of the newly established literary weekly, Literárny týždenník. In 1990 - 1993, he was the editor in chief of the weekly Kultúrny život and then in 1999 he became the editor in chief of the literary magazine Romboid. Štrpka entered literature as a member of Osamelí bežci (The Lonely Runners), a collective of poets. His first book Krátke detstvo kopijníkov The Short Childhood of Lancers is a record of growing up and a record of the defiance with which a young soul faces the humiliation of social reality. The next book Tristan tára Tristan Talks Trash deals with empty phrases of the socio-political newspeak. Now and Other Islands is a concept, an exploration of man here and now. In his fourth book Before Metamorphosis the poet tries to free himself of the heavy burden of logical thinking and previous experiences. Štrpka is obviously reorganizing and repositioning qualities and meanings in new structures thus giving them a completely different, new dimension. News from the Apple reaches into the magical depths of the author's world which is multi-colored and full of unresolved mysteries. The collection entitled Everything Is in a Shell oscillates between a travelogue and a grotesque vision with a strong inclination to Eastern philosophies, particularly Zen Buddhism. The poetical composition Beautiful Naked World gives the impression that it was written by a man who looked over his shoulder and suddenly discovered a world full of miracles and fairy tales. Maybe it is an expression of his longing to see things as they used to be, in their natural form. His essays are based on his political thoughts and experiences as an editor in chief of a literary weekly. Rovinsko, South- west. Mother`s Death , full of grave and dark tones, is an attempt to evoke trysts with reality from the other side of experience. Alongside his poetry, Štrpka also wrote lyrics for Dežo Ursiny, a legend of the Slovak pop music. Part of those lyrics was published in the collection Modrý vrch (Blue Peak, 1988). Nothing that he puts in his texts is random, and his essential concern with what moves the world is evident in his poetry. Štrpka’s most recent poetry collections are Fragment (rytierskeho) lesa / Fragment of a (Knight’s) Forest, 2016 and Kam plášť, tam vietor (The Wind Goes Where the Coat Blows, 2018). He is also the author of essays and prose texts.