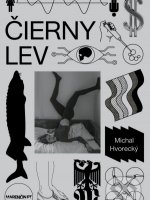 Michal Hvorecký is a skilled writer whose books came out in translation in various languages. With the collection Čierny lev / Black Lion, he returns to short fiction. His dynamic, funny and literary sophisticated texts are a reaction to explosive topics such as political vote, global migration, pandemics, ethical questions regarding genetic and digital technologies. The characters in Hvorecký's texts fly on drons, fight right-wing populists, they are fish and genetic editors. His stories are fantastic not only because they belong to the fantasy genre.

Intímna vzdialenosť / An Intimate Distance is a story about pandemics, isolation and loneliness depicted with an extraordinary sensitivity. Even though the centre of the story is weighed down by sadness and environmental problems, as a whole it contains optimism, depth and human intimity. (...) Despite the fact that the short story describes a scenario that is more catastrophic than our reality, it includes hope. Had the short story We Are Family been written a couple of weeks ago, it would sure have responded to more pressing problems of the main character (certainly not a hero). The text reads smoothly and is full of irony and parody.

Čierny lev / Black Lion falls into the cathegory of alternative history, a genre that Hvorecký has successfully explored several times. In this short story, the alternative history of Czechoslovakia is being written. The Czechoslovak government does not write an invitation letter to Moscow and to the armies of the Warsaw Pact, instead they write to Washington and NATO. Hvorecký offers an empathic portrait of the political situation, describing it in a convincing and veritable manner, with a healthy dose of black humor and vodka.

U.R.U. is an intertextual reference to Čapek's play R.U.R. The story takes place on January 21st 2121, a magical date which marks the 200th anniversary of the play's premiere. The narrator of the story is a female dissident invited to a play shown at the apartment of an actress. In the short text the themes of Čapek's play resonate: the old conflict between humans and robots comes to life again, as does the magic of theatre, sorely missed not only by the characters from the story but also by all of us during the pandemics. The short story Editorka / The Editor draws an interesting parallel between editorial work done on a text and on genetic material in the future, "when literature and editting could not be studied." (pg. 42) Hvorecký's editor erases illnesses from the genetic information of children, but within the code, she also does luxurious cosmetic alterations for money. The short story moves through different genres, from science fiction to gothic fiction to horror.

Druhý Dunaj / The Second Danube is an environmental and extremely touching short story about a sturgeon (...) We follow the life journey of a gigantic fish that is ritually returning to the Danube. The short story is an environmental dystopia and it shows the plundering of nature and the disappearance of animal species and water. The sturgeon sees how "the cormorants were disappearing, how the otters ran." (pg. 62)

Aiša, on the other hand, reflects the theme of migration as well as our reaction to migrants. It is provocative, ironic and, similarly to Tajomník / The Secretary, it shows a reality that is not kind, open or tolerant. As Aiša, the young Syrian refugee who "offended everyone: the Catholics, the nationalists, the government and perhaps also the hockey players, chefs and cleaning ladies," (pg. 71), struggles with being misunderstood and not welcome in the country, The Secretary needs to fit in with the mass society and its (questionable) values. The secretary, a profit-seeking hypocrite, uses reparative therapy to turn "so-called gays" (pg. 79) into heterosexuals: "Thanks to proven results in the field of deviations, the government has made me the expert secretary for matters of traditional family." (p. 84)

The short story Warholove nohy / Warhol's Legs depicts the train ride from Prague to the East of Slovakia, where Andy Warhol is from. It is about the people who defeated the communist regime but who are unable to overcome themselves. We read about a comical or even grotesque version of folklore and culture. (...) Sad.

Malte is an ambiguous character from the eponymous short story. A two-faced man, a pathological liar, a thug and an opportunist without conscience and history, without home or friends, he is an archetype for many politicians.

The short story Neviniatko / Innocent follows a detective, a tracer who is looking for people infected with a virus. The mis-en-scene of the dystopian story is moved to the underground, to old army bunkers and catacombs. It's difficult to find a job when one has to compete with robots. People are controlled and under permanent surveillance by informants and tracers. Despite the thrilling political atmosphere, the text also delves into family relationships and looks at parents and children and at parental worries and unstopping fears. The open ending asks the reader for a creative collaboration with the text and everyine may co-create the short story.

The short story collection has a beautiful cover designed by Palo Bálik featuring Nadja Massun's stunning black and white photography of a woman who is upside down -- just like the fantastic, alternative and sometimes dystopian world described by Hvorecký. Current topics, original style, humor and surprising endings are a treat for the reader.

Places in the Net - Veronika Šikulová