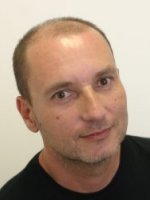 The Best Picture of the Century

(extract)
The photographer sits in the kitchen of his eight floor apartment eatinh cold wieners for breakfast. Witch each morsel he thinks of the child he shot a picture of yesterday for the cover of a tabloid magazine. A three-year old leopard pulled the boy of the same age into his cage in the zoo and bit him across his throat. The boy didn’t resist. He trusted the leopard because he thought it was just another plush toy produced by his father’s company. When the poor boy fell to the ground and the pouring blood stained his white summer shirt printed with black cats, the leopard released him from his claws with a growl. One could see the tension that gripped his body relax, and his eyes again gained the calm expression of a guard ready to attack whenever necessary. The boy’s careless mother watched what was going on with a deaf expression on her face. The red colour filled her entire horizon as a red filter covers a lens. She spread out her arms to the falling boy automatically. She was shouting.

At this moment the photographer knows that it is not the leopard who is to be blamed for the death of the plush toy factory owner’s son. He did just what came naturally to him. After years he had again been given the chance to prove he was a real hunter and to attack. The influential father of the deceased boy will surely wish to have the predator shot. He thinks that he will thus assuage his tremendous pain. Maybe the zoo employees have already done it early this morning or even yesterday evening. But one thing is sure: the leopard will not part from this world as a walking plush decoration of the precisely demarcated iron cage, but as a predator and victor.

This idea has a soothing effect upon the photographer. He lights a short cigarette and blows the smoke right against the window pane wit a borown Venetian blind. He rubs the mechanism which opens the blind, with his fingers. He looks down and sees a pink boulevard, a street-car turning to the left, a man bidding good-bye to his wife in a greenish suit, the blinking Marlboro ad, freshly cut flowers in front of a newspaper stand, a woman typewriting on the first floor of the building next door, a man looking at the map of the world and… on the floor of an art nouveau apartment building the photographer sees a child with golden hair, that is leasing against a window and striving to open it. The child, maybe a girl, is laughing at the street mime and it is clear that the child wants to be down on the street, where the important things are happening and she wants to get there quickly. The photographer overturns the chair he is sitting on and for one moment he seems to want to open the window and shout, to shout out loudly, to yell at somebody to get hold of the child and pull her back into the room, just to grasp the child. Instead he starts rummaging desperately through a box. He takes a few bad quality films in his hand without ever letting the child, who is now shaking the handle of the window, out of his sight. He continues his search. He needs to find a high-quality film, this moment is his life chance. The trace of the leopard on the child’s neck. He can already see on the cover of a renowned magazine his colour picture of the child falling down on the city, the street, the square full of flowers, life, afrriving and departing street-cars, sweaty men tranquilly drinking beer from bedewed glasses. This picture may even become the picture of the year or decade, maybe even of the century.

He winds the film in the camera with learned movements and running into the kitchen he clicks the camera twice. He abruptly opens the kitchen window, from which he has the best view, and aims his camera at the child, who has meanwhile managed to open the window and is now stepping onto the window sill with one small foot. The photographer is ecstatic. He holds his breath. Drops of sweat appear on his forehead and something inside him whispers: Fall down, come on, finally fall down…! Step forward!

He zooms the lens constantly towards and away from the child, the child condemned to death, the child leaning over to touch the screeching crane. One more step, come on, faster, now (!), the tension is pressing the photographer’s body and head as steel cramp pushing until only one shape, a huge eye, remains. It seems that he will not be able to stand the tension any longer… the child is laughing, moving onto the window sill more slowly, the man with camera is strained like a steel cable, life in the city stands still, smoke stops rising from the factory chimney, when… two hands, two unknown, quite insignificant stupid hands get hold of the child and pull her back into the room. It’s over. The photographer takes a breath. He stars breathing. Slowly and tersely. He slowly lowers his hand holding the camera onto the cupboard under the window. His finger brushes against the handle of the cupboard holding the dishes. The leopard flashes across his mind. With one quick motion he knocks the whole cupboard with the dishes to the floor. He throws out the cups which did not break and then he takes out something wrapped in a white, slightly greasy and oily, dirty cloth. He runs down eight floors over spiral stairs and walks out into the street. The bright light blinds him for a moment. He runs between cars, takes notice of the pink stand with fresh flowers. He has the crying child with golden hair before his eyes. He hears only the distant horns of cars. He runs into the house where the child lives and after bounding three steps he starts hurrying to the eighth floor. He stops. He rings the door bell. He rings. And rings. An old woman finally open the door. The photographer shoves her aside and dashes in. He bolts in three rooms. The child is not there. He made a mistake. The child will be in the apartment next door. He rings another door bell. A woman in jeans opens the door. She stands in his way. The photographer pulls a gun from his pocket and shoots. The woman falls to the floor. The man steps over her and dashes into the room. The child with hair like an angel is playing in the corner of the room, on bare parquet. The man with the camera gently takes the child in his arms and opens the window. The child smiles happily at him and takes one step forward.

The photographer is clicking the release, one frame after the other winds on in split-second. He does not take in the stand with fresh flowers, the hurrying people, the ice cream vendor in a fez, the street mime in a moment of surprise, the sneezing lottery tickets vendor, trees without leaves, the Italian goldsmith’s shop, the fat accordionist sitting on a fishing chair, the junkie inhaling narcotics in front of the underpass, the dog without the collar, arriving and departing street-cars.