Join World Kid Lit LIVE on our next session focused on Central European Literature for young readers: Trends and Highlights.
Wednesday, 24th March
4pm-5pm GMT
Speakers:
Anna Bentley is a British translator of Hungarian literature living in Budapest. She has translated Ervin Lázár's children's classic, Arnica the Duck Princess (Pushkin Children's Press), and Anna Menyhért's study of five forgotten Hungarian women writers, Women's Literary Tradition and Twentieth-Century Hungarian Writers (Brill). Since then, her work has appeared in Asymptote's blog 'Translation Tuesday', in Trafika Europe's online journal, Panel Magazine and Consequence Magazine. Her translations of contemporary poets such as Mónika Mesterházi, Zsófia Balla and Béla Markó have appeared on Hungarian Literature Online.
Antonia Lloyd-Jones is known as UK’s leading translator of Polish authors, including the Nobel Prize winner Olga Tokarczuk, Jacek Dehnel, Mariusz Szczygieł, and Artur Domosławski. In 2018 she was honored with Poland’s Transatlantyk Award for the most outstanding promoter of Polish literature abroad. Her translations of illustrated children’s books include Julian Tuwim’s Mr Miniscule and the Whale (Book Island), Maps and Under Earth, Under Water by Alexandra and Daniel Mizieliński (Big Picture Press), and Oscar Seeks a Friend by Paweł Pawlak (Lantana). She has also translated novels for children including Kaytek the Wizard by Janusz Korczak (Penlight Press) and Clementine Loves Red by Krystyna Boglar (Pushkin Press, co-translated with Zosia Krasodomska-Jones).
Julia Sherwood translates fiction and non-fiction, mainly from and into Slovak, as well as Czech, Polish and Russian. With her husband Peter Sherwood she has translated works by a number of Slovak and Czech writers, including Bratislava, the Magic Metropolis. The Magic Metropolis, a children’s book by Michal Hvorecký. She is the co-editor of the anthology Into the Spotlight: New Writing from Slovakia with Magdalena Mullek, with whom she ha launched and co-curates the website SlovakLiterature.Com. She serves as the editor-at-large for Slovakia for Asymptote and has organized literary events to promote Slovak literature in the UK.
Moderator:
Alexandra Büchler is director of Literature Across Frontiers, editor and translator of poetry, fiction and non-fiction between her native Czech and English, and contributor to WorldKidLit blog. Among the authors she has translated into Czech are J.M. Coetzee, David Malouf, Gail Jones and Janice Galloway, and the YA author Isobelle Carmody. She was editor of the „Six Poets“ bilingual series of anthologies from Arc Publications 2006 – 2016. Her translation of the Czech modern classic novel The House of a Thousand Floors by Jan Weiss was published in 2016, and she is currently working on translation of selected poems by Kateřina Rudčenková. 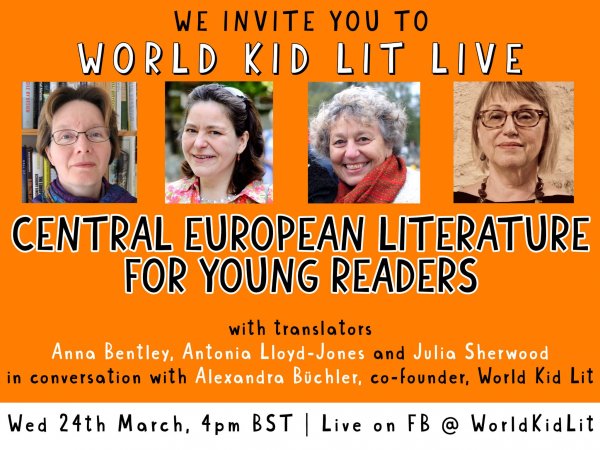