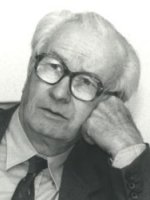 The more than thirty years-long presence of Alfonz Bednár in Slovak literature has proved to be a fund of artistic treasures. Although the critics viewed him as part of the "prose of the National Uprising" he has been an exceptional writer from the very beginning. He never accepted the schematisation required by the party ideology. He paved his own creative way and thus gave himself open to ill-will and misunderstanding on the part of literary critics. In the novel The Glass Hill, in the diary confession of a young woman whose struggle for reconciliation with her own past ends tragically, Bednár replaced the strictly socially determined heroine with a heroine with individuality - and an even more tragic destiny. The novel gained an unusual readership response not merely because of Bednár's courage as an author but because he introduced a new means of construction into Slovak prose; a subject with "secrecy" altering some time sequences, the intimate diary in the form of notes, excellent speech and an authoritative ability to use different speech techniques and the methods of modern, mostly Anglo-Saxon prose. This was evident in a large proportion of the short stories Hours and Minutes. In spite of its significant artistic quality, a proportion of the critics described it as "without a class basis" and "abstractly humanistic" and censorship removed from the book the short story The Unfinished House. (The complete collection was published entire in 1962.) In his stories Bednár at first showed the "cursed" face of the National Uprising and the true social circumstances of the era of the Second World War, presenting in an effective manner the dark, instinctual side of humanity - including those on the "right" side of history. To sharp attacks he retorted, "I don't know about great historical events which are not accompanied by dirt, blood and horror from which an individual can emerge without unimaginable suffering very slowly and with great effort in order to be described as a human being". His novel The Tooth of Thunder is a modern epic of witness about a Slovak village over half a century. This novel can be described as innovatory because it depicts a Slovak village from within mapping its deep levels, artistically exploiting its historical and mythical memory.
In the late 1960's Bednár began - both in artistic and public terms - to ask uncomfortable questions about the "socialist" present. He chose mainly the form of allegory, parable and satire.