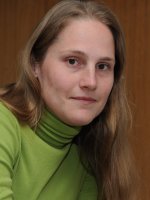 Alexandra Salmela studied Theatre Studies in Bratislava and Finnish at the Charles University in Prague. She debuted with the novel 27 čiže smrť robí umelca (27 – Death Makes the Artist, 2010), published in Finland where she lives. She became the first person without a Finnish citizenship to win the prestigious Helsingin Sanomat Literature Prize for best debut. She has written the children’s books Princezná opica (The Monkey Princess, 2012) and Žirafia mama a iné príšery (The Giraffe’s Mother and Other Monsters, 2013). She is also the co-author of the children’s bestsellers Mimi a Líza (2013) and Mimi a Líza 2 (2015), based on the popular Slovak cartoon series of the same name. Her utopian novel Antihrdina (Antihero, 2017) has made it into the top ten finalists' list for the Anasoft Litera Award 2018. She has two children and grows oak saplings in flowerpots.