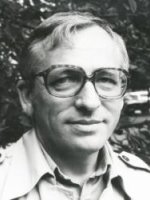 Ivan Laučík entered the literary scene as a member of the group Solitary Runners with his book of poems Pohybliví v pohyblivom (Moveable within the Moveable, 1968) in which he expressed his concern about the state of human civilization, threatened by doom. His second collection, Sme príbuzní na začiatku (We Are Relatives in the Beginning, 1970), reflects the chaotic modern world yet at the same time points out the possibilities for protecting basic human values. After almost twenty years of forced silence, he published another collection of poems, Na prahu počuteľnosti (On the Threshold of Audibility, 1988), depicting the present full of contradictions and conflicts caused by the exploitation of nature. Vzdušnou čiarou (As the Crow Flies, 1991) expressed the poet's yearning for human understanding and love. One of his closest colleagues, another Solitary Runnee Ivan Štrpka writes: "Every poem is a dynamic meaningful process of creation aiming at an entirely new whole, not just a sum of meanings. (...) His concise expression, bluntness, his writing methods close to juxtaposition, dynamic semantic editing, suggestive visuality, gentle irony and sarcasm are most eloquent. There is no redundancy."