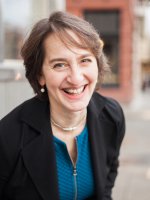 Janet Livingstone, MA was born in Brookline, Massachusetts in the U.S. and lived in Bratislava, Slovakia for a total of 17 years. She studied Italian, Spanish and Russian at McGill University in Quebec and holds a masters degree in international affairs from Georgetown University in Washington, DC. In 2003, she began translating from Slovak to English and has worked on: documents for the Slovak Ministry of Foreign Affairs; scripts and subtitles for Slovak films (All My Husband’s Women, Soul at Peace, The House and Ticho with M. Brezovska); and various works of Slovak drama (House of Silence by Silvester Lavrík, Communism by Viliam Klimáček).  Other works of Slovak literature recently translated by her include: The Best of All Worlds, a novel by Slovak-Swiss author Irena Brezná and two novels by Jana Beňová, Away! Away! And Seeing People Off. Ms. Livingstone lives in Seattle, WA in the U.S. and works as an expert in leadership development, training and cross-cultural management.