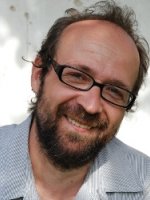 Writer, publicist, screenwriter and musician, Márius Kopcsay is a master in describing the fates of ordinary people with their everyday problems and misadventures. When telling his witty, ironically-inclined stories he uses modern language, not avoiding slang or harsh expressions. In 1988 he made his debut with the story collection Kritický deň (Critical Day), for which he received the Ivan Krasko Prize. He continued with the story collection Stratené roky (Lost Years, 2004) and the novel Domov (Home, 2005), with which he reached the final of the Grand Prix for East European Literature. Also successful were his later works including the story collection Zbytočný život (Useless Life, 2006), the novel Mystifikátor (The Hoaxer, 2008), the novella Medvedia skala (Bear Rock, 2009), the story collection Veselé príhody z prázdnin (Funny Incidents from the Holidays, 2011) and the novella Jednouholník (Monogon, 2014). In 2007 he was awarded the Anniversary Prize of the Association of Writers’ Communities in Slovakia, and five of his books have reached the final of the prestigious Anasoft litera prize. His latest book is a novel titled Asvabaždénie (2015).