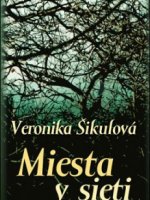 Places in the Net - Veronika Šikulová

Places in the Net is a three-generation novel. Big historical events —World War II, the Communist takeover, political trials etc.—unfold against the backdrop of little, ordinary stories of one family.

In the autobiographically motivated novel Places in the Net (Miesta v sieti) author Veronika Šikulová concentrates on the lives of three women from one family: the grandmother Jolana, her daughter Alica, and her granddaughter Verona. Verona, influenced by their sad but resilient existence, tries to come to terms with their sorrows and confusions. She is looking for her own place within the network and for an equilibrium within herself. Her narrative recalls the colors, smells and tastes of the past, remembering various characters and public figures of a bygone world; it also touches on human tragedies, both minor and major, caused by historical events such as the war and the rise of totalitarianism. Šikulová's novel is not just a story about history with a capital H and its impact on everyday lives, it is also a novel in which strong women are forced to rely on themselves, to find courage to go on living and look after each other after losing everything.